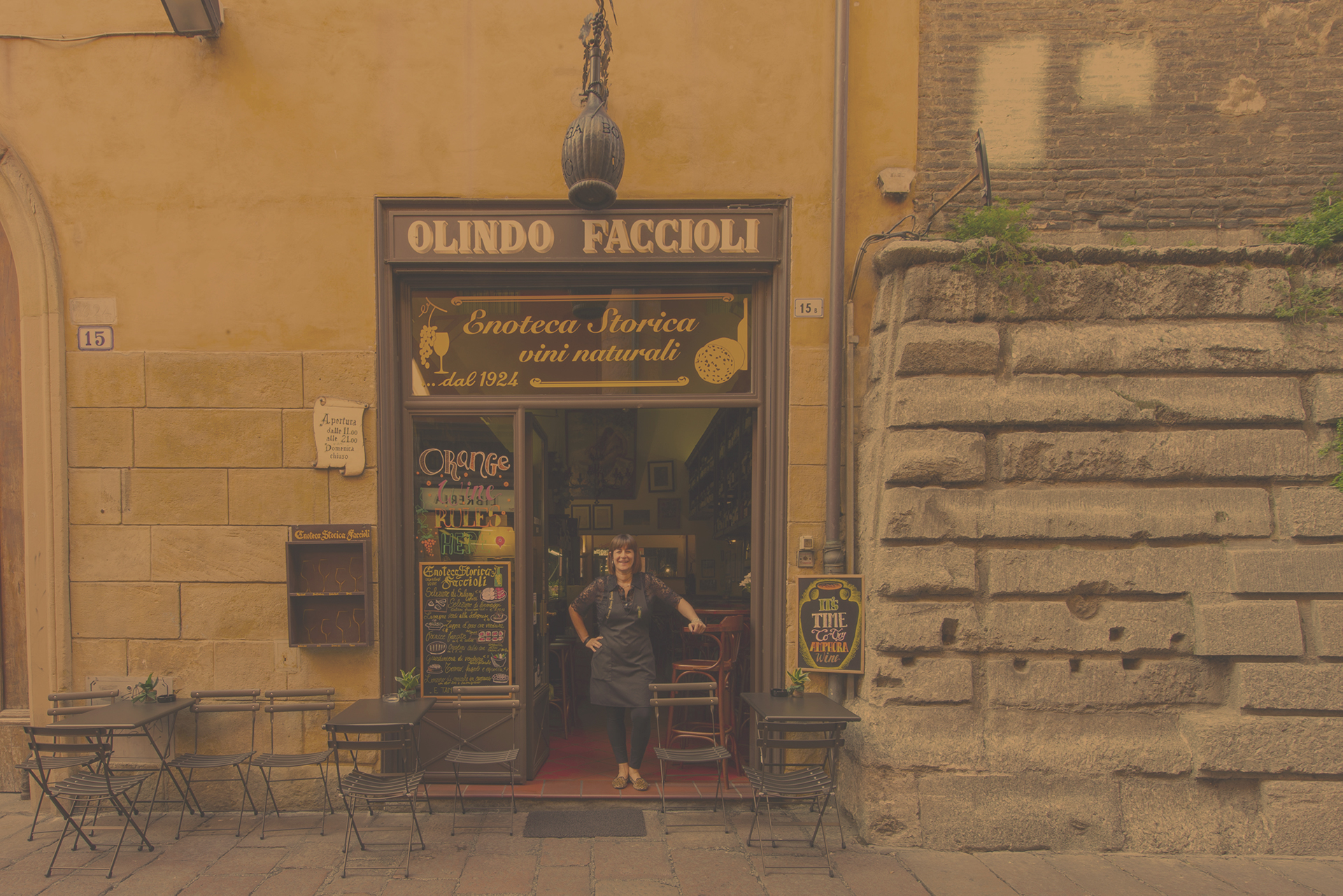 OUR PASSION FOR NATURAL WINES

We are Elisa and Stefano and on the 10th of September 2012, we took over what has always been known in Bologna as Olindo Faccioli Wine Shop.

Elisa’s love for natural wines was born thanks to the years in which she worked in an important wine shop of Bologna, where she learned a lot about this world and about what surrounds it. As a consequence of this experience she got her diploma as a Sommelier at the Italian Sommelier Association.

A few years ago the fortuitous meeting with Stefano took place and the path towards what is now a job began, which includes life experiences as well as experiences in the field that can be relished every time you pour a glass of wine.

We are waiting for you at the Historical Faccioli Wine Shop, in a pleasant environment where you can enjoy all our passion for natural products which can be enjoyed alone or in company.

THE HISTORY OF THE HISTORICAL FACCIOLI WINE SHOP

Just imagine you are in Bologna, in the early ’20s. If you happened to be near the Asinelli Tower, a small and crowded place would have certainly caught your attention. Mr. Olindo Faccioli’s wine shop was a long and narrow corridor, with the entrance on one side and the exit at Porta Ravegnana Square.

People used to go there to have a good wine, the choice of which was usually between a white and a red, but strictly of high quality. However, in case they were hungry, they had to re-enter from the main door and stand in line again.

After ten years, in 1934, the mayor of Bologna decided to evacuate the premises; Mr. Olindo had no other choice and found himself in the embarrassment of having to decide where to move the bar.

In spite of the importance of the street even then, Via Rizzoli was not to his preference… so he decided on Via Altabella, a quiet street, secluded but close to the old location, where there was this tower that was Straight, High and Beautiful, and for these reasons later gave its name to the street.

Those were difficult times… Mr. Olindo worked in the store during the day and slept in the back room at night to avoid unpleasant surprises in the morning.

However, those were also the times when the taverns represented the nerve center of Bologna’s social life. That was where people went to chat, drink a good glass of wine or play cards.

Many years later, his son Fiorenzo and his wife Marina joined the family business, carrying on Mr. Olindo’s tradition, enriching the service with typical Bolognese dishes.

Continuing the family tradition, Carlo, an expert sommelier, took over. Following in the footsteps of his parents, he has maintained the tradition of the restaurant, preserving the Art Nouveau furniture, Thonet benches and chairs, wooden shelves full of fine bottles, and above all a counter with the same Veronese marble platform that his grandfather had to replace with tin, because it was used to produce guns and cannons that were intended to defend the country from invaders.

One hundred years later, Elisa and Stefano have recreated the atmosphere of that time, in an elegant and welcoming environment. Guided by the passion for good wine and good food, concretized in a wide selection of authentic natural wines, respectful of nature, territory and tradition.

More than 500 labels of natural, organic and biodynamic of local, national and international origin, including 60 of Champagne.

The natural wines without sulfites are the perfect accompaniment for a wide variety of culinary products. A great attention to raw materials, which is perceptible in the foods

A selection of cold cuts and cheeses from Italy and all over the world that enrich the offer of traditional Bolognese dishes.

DISCOVER THE SELECTION OF NATURAL WINES